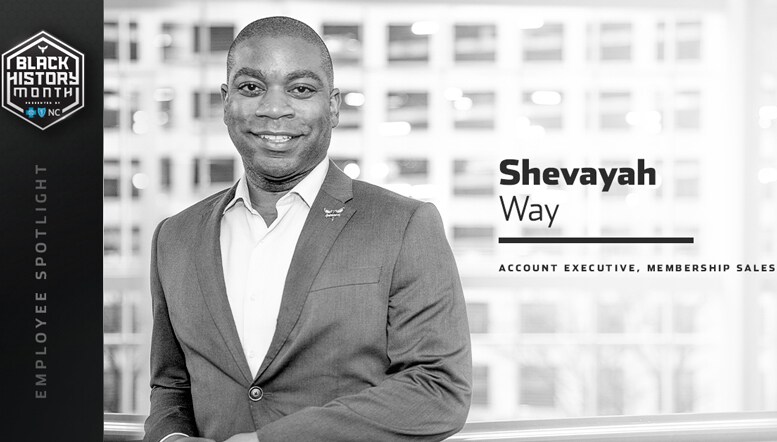 “I am an Account Executive in Memberships Sales, which means bringing in new business with regards to selling season tickets. All of our ticket plans – full season, half season, mini plans, six games – go through our department. We do individual games as well, like courtside seats, royal boxes, suites and premium seating in addition to concerts and shows at Spectrum Center.”

“When I was Indianapolis working for the NCAA, I was selling championships tickets for conference tournaments and March Madness. That was cool, but I wanted to be part of a team and not at a call center as much. I remember when I first started looking at the Hornets, meeting certain people was big for me and they became people I could look up to. They were in higher roles than me, but I could see myself in them. Director of Premium Memberships Services, Cedric Roberts, has certainly been a mentor to me. Seeing people who look like me in prominent roles in the NBA industry was something that was big.”

“It’s a time to reflect and see where we are as people and how far we’ve come from where we’ve started. It’s a chance to be appreciative of what we have and what I have that many people before me didn’t have back in the day. There’s a sense of pride that you represent something bigger than yourself. Coming to work every day, you realize there’s people who really sacrificed for this. I remember when I used to ride the bus to come to work, I would always think about what it was like not being able to sit in the front. Some people went through a lot and not too long ago. My grandparents went through that. Overall, it’s definitely a time of reflection and to be thankful.”

“I once had an appointment with a guy at the arena and his son came. His son thought I was one of the Hornets coaches. I was like, ‘No, there’s more ways to get into sports other than just playing or coaching.’ For me, kids always look up to you, always ask you questions about how you got your job. It’s cool to give the younger generation an example of what they can be. They can get to the same spot I’m at and go further if they want. You don’t have to be an athlete. You just have to be dedicated, work hard and you can get here, too.”

“Even to the kids in my neighborhood, those are the ones I influence the most. I see them all the time and they think I’m bigger than life because I’m with the Hornets and the NBA. You’re always representing something that’s bigger than you and here, you’re basically representing a little kid’s dream. I definitely see myself as somebody people my age or my friends or young kids can look up to.”

“My little brother, Amari, plays sports and went to college for football. His main thing was to always try and get into sports for a living. I’ve always been somebody that he could look up to and show him how our family operates and what our standards are. We’re not going to mess around. We go to school, we go to work, we laugh, we play, we have fun, but we work hard. We’re not doing what the other guys are doing in the neighborhood. We’re doing something bigger than that. I’m nine years older than him and he’s always had no choice, but to look up to me. I don’t want to ever have him look at me in a negative light. I want him to always have that same admiration for me. I’ve got two little cousins now, too, one of which goes to Benedict College in South Carolina and the other is about to graduate. Being role models for them is important because I want something positive for them to look at.”

Are there any influential African-American role models in your life?

“Definitely, my mother, Donna. I never knew my father, so it was just me, my mom and my little brother. My mom went to Florida A&M, so I went to Florida A&M. I’ve watched how she moves, how she operates and how she doesn’t take crap from anybody. She’s laser focused. My auntie, Carlene, is another one. My mom works in the nursing field, but my auntie has a more corporate America job. To see how she’s been able to rise and whenever I’ve got a question about how she would handle a situation, she’s always there. To see her as one of the directors at her company in Washington D.C. is amazing. They’re the two most influential figures I know personally, who I talk to everyday about my life and where I’m going.”

“My biggest role model as an African-American is definitely Muhammad Ali. He’s my favorite athlete. His fights and trash talk were great and everything, but the biggest thing I love about Ali is how he stood up for what he believed in. He was willing to sacrifice what he loved to do the most for other people’s rights. He gave up his championship, license to box and said, ‘The Vietnam War isn’t our war. It isn’t something I believe in and I’m not fighting in it.’ I wasn’t around back then, but I’m sure if I was, I would have been a young kid saying the same thing. If he can go to jail and lose everything, then I can lose whatever I’ve got, too. That attitude now, it’s about not being afraid to stand up or fight for what you believe in. Live your life with a purpose. Don’t just wake up and come to work. Have a reason for doing what you do.”

“One of our season ticket holders has also been very influential to me. Seeing a black man in his 50’s, but making over $200,000 a year, has me sitting back like, ‘Wow, I want to be like you when I get older.’ I tell him that all the time. I want a beautiful wife, big huge ring on her finger. I want to be like him when I’m his age. Since I’ve moved here, he’s definitely been somebody who has been really influential on my life and who I talk to all the time.