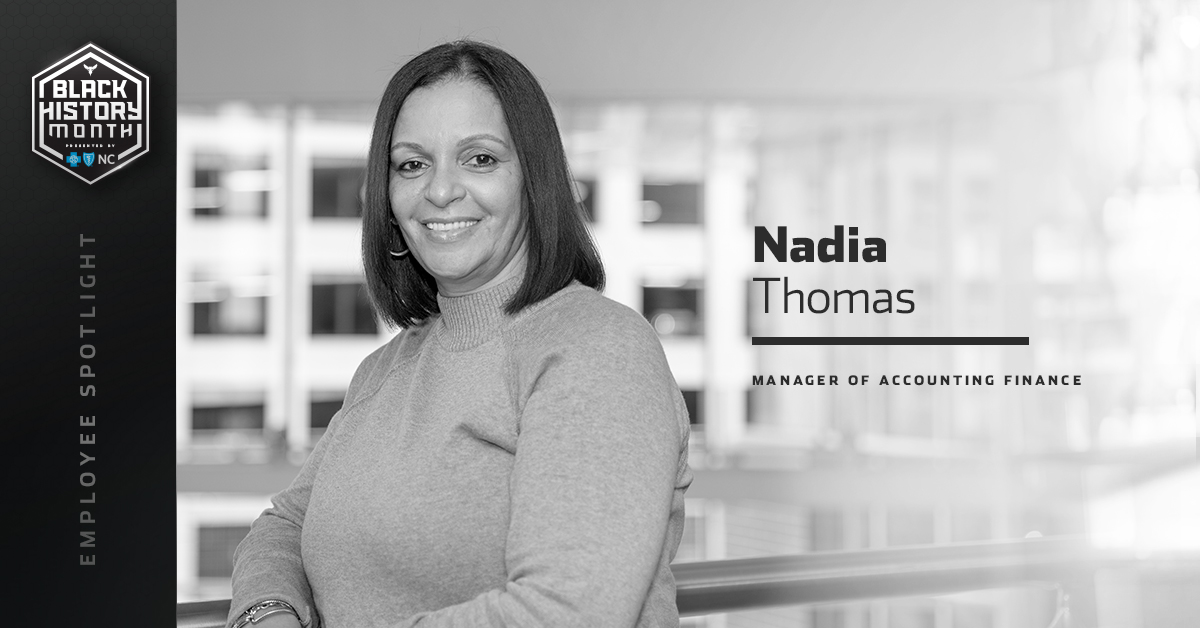 “I am a Manager of Accounting working in the Finance Department for the Charlotte Hornets. As a team we also do the finance and accounting for not only the Charlotte Hornets but also the Greensboro Swarm, Hornets Venom GT, Arena operations and the Hornets Foundation. One of my primary tasks is supporting the sponsorship team in billing and AR accounting, I also support team store accounting along with the Foundation along with bunch of other things. There are six of us on the finance team and while we each have things that we focus on, we are also an all-hands-on-deck finance team which is something that I truly appreciate. We make sure all the numbers are right for the Hornets Organization.”

“I ended up in finance just by default. My first job out of high school, I worked for HSBC Bank where I worked my way up from a data entry clerk to consumer finance during college over a period of 10 years, but it wasn’t always where I saw my career going. I tried some other career aspirations and then defaulted back to finance. Before joining the Hornets, I worked for another company where I was this small piece of a huge, multi-billion-dollar machine. I had been there for a month and I got a call from a recruiter about a job with the Bobcats. I took the interview on my lunch and I remember the feeling of liking a smaller team and the Bobcats finance people saying they would teach me everything they knew. They took a chance on me and helped me move along in my career. I’ve now been here 10 years, but that was the biggest turning point, for sure.”

“It’s a celebration of black history in this country. You can have an appreciation for this month and recognize the contributions and accomplishments of African-Americans, but at the same time, it needs to be done throughout the entire year. I understand as people of color, we haven’t always gotten our recognition or just due. We started having to become our own cheerleaders and tell our own stories. I understand the need for BHM because minorities or people of color, their history has been lost, and although that narrative is beginning to change, we do need to celebrate. It’s all a part of American history. It’s important to celebrate because it’s the time we do get the light shined on things people of color have contributed, what we’ve accomplished, changes that have been brought forth, so we can live the way we live today. As we move forward, how do we extend it all the way out to making it about American history?  We have power and control over the narrative of black history. Our stories are being told a lot more in movies like ‘The Best of Enemies’, ‘Harriet’ or ‘Hidden Figures.’ You start to see those things come out, ultimately we need to continue bringing these stories to light.”

How do you see yourself as a role model in the African-American community?

“I am member of my sorority, Delta Sigma Theta Sorority Incorporated, which I joined at the University of Buffalo. We were founded on January 13th, 1913 built upon Sisterhood, Scholarship and Service with emphasis on public service in our communities. One of our first public service acts as an organization was the Women’s Suffrage March which took place on March 3rd 1913. Through my sorority, I’m able to focus on our public service initiatives, things like physical and mental health, political awareness and involvement, economic development, educational development and international awareness and involvement. We have programs and community service events which revolve around these initiatives that I am actively involved in. I understand that if I’m doing something out in the community where I have my sorority letters on, people see me more and wonder what we’re up to. I recognize that eyes are on me and how we portray ourselves in the community. You have the ability to create an impact, make an influence on what our organization and I’m about.”  One of my favorite quotes which reflects the above is, “If you want to go fast go alone, if you want to go far go together”.

“Becoming part of our organization is a lifetime commitment. Once you graduate from college you join the Alumnae chapter of the city or community in which you live. It is the collective efforts of women who are already servants and activists in their community that makes what we do as an organization possible. It’s not the letters that make the women but the women who serve the letters. My daughter watched me since she was a little girl be involved with my beloved organization and she has followed in my footsteps. Other women have come up to me and said I’m the reason they wanted to join this organization. I just try and make the best impact and use my opportunities to make this world a better place.”

Are there any influential African-American role models in your life?

“One person that has always stuck with me since I was younger was a teacher by the name of Wadine Murphy, who is also one of my sorority sisters. She was my sixth-grade teacher at a school called Campus East who has been ingrained in my memory because she pushed me to be the best and to get myself in line.”

“Growing up, I had a tough time. I was half black, half white and living in a predominantly white neighborhood. I really had a struggle from both sides and didn’t fit in or belong anywhere. I was born two years after Martin Luther King Jr. was assassinated, so we were still heavily in segregation times. I was going to a magnet school that was 50% white and 50% black and I was right in the middle. On top of that, I’m adopted so, I’m not even with my birth parents. Mrs. Murphy took me under her wing and got me back in a line with convincing me I was smart, a good student and needed to stay focused. She got me into doing the Richmond Speaking Contest where I recited Martin Luther King Jr’s ‘I Have a Dream Speech’ and I won! She’s just always stuck with me in the back of my mind.” After I joined my sorority, I was able to find Mrs. Murphy and greet her as my Soror and let her know that she’s had a huge impact on my life. She redirected me from the path I was going down.”