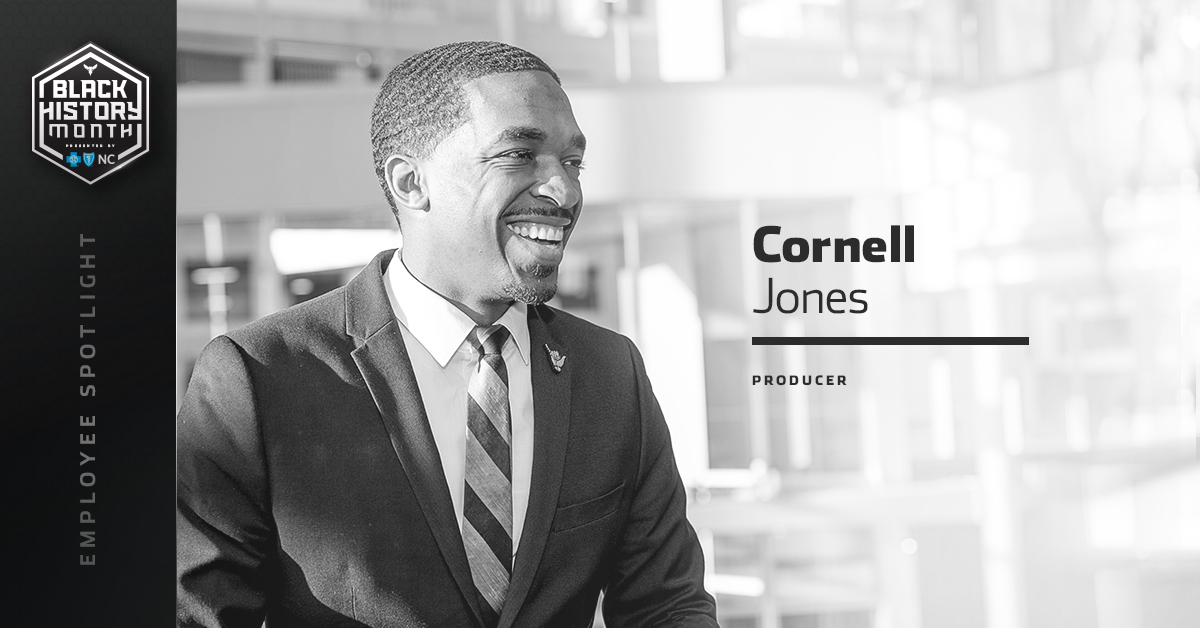 “I am a Producer and I get the chance to conceptualize ideas, shoot video, edit and take things through the full production process. I just started a few months ago, so it’s been a fun, exhilarating time coming in during the middle of the season. I’ve had the opportunity to work on a lot of Black History Month projects. It’s been very fun.”

“I would say attending my HBCU, which was Winston-Salem State University. I came from a less diverse area in northern Virginia and I knew I wanted to go to place where I would see a lot more people like me succeeding. When I stepped on the campus of WSSU, it was literally eye-opening. It changed my life from the second I got there and by the time I left, I was leading the charge a little bit and setting examples for people behind me. When I came out into the work force, it definitely set me up for success. I can’t thank WSSU enough. I try and give back every time I can, go to games, go to everything because I owe them so much.”

“It’s a specific time that we can focus on literally Black History. I think a lot of people in their personal lives, if it’s a birthday, they’ll reflect and think it’s a great time. I think that’s what Black History Month is for an entire race. Let’s sit back and reflect on what we’ve done in the past and what we can do in the future. It’s also a good learning tool for a lot of the youth coming up now. There’s a lot more ways that you can find information like YouTube and social media and now, there’s Black History Month stuff everywhere. It’s a specified time to look at your history and be proud of it, but I think it should continue all the way throughout the year as well.”

“A lot of people don’t operate on faith, so they need to see something and they need to see it in front of them. I try and be that in my industry and for the people that look up to me. When I was in college, people would always laugh at me when I said I was going to work at ESPN, be on TV and produce things. They were like, ‘You don’t have any background in that,’ and I said, ‘I’ll figure it out.’ Through years and years of work, I got there. Then I told people I wanted to come work for the Hornets and go back to my second home in North Carolina and now, I’m doing it. A lot of people that see me, they now believe they can do it themselves. For me personally, that’s who I want to be. I want somebody to say, ‘Cornell did that. I know I can do it, too.’ Leading by example is how I see myself as a role model.”

Who are the most influential Black role models in your life?

“When I think of Black role models in my life, it’s literally everyone I’ve encountered in my close personal circle, starting of course with my parents, Theodore Sr. and Dr. Zella Jones. They set the example for my brother, Theodore Jr. and I in our personal household. My mom is a doctor and principal and my dad’s a therapist. My dad would come home every day and say, ‘Sit down. We’re going to talk about your day. We’re going to set this up and do different things.’ They both set me up for greatness.”

“When I got to WSSU, you select your family there. These are going to be the people who stick with you for the rest of your life. I was blessed to select two amazing friends in Desmond Barnes and Jonathan Jackson, who to this day, challenge me in ways I couldn’t have imagined. I look up to them more than they know. WSSU also brought me my wife, Vanity. She pushes me harder than anybody can. When I think I’ve done something great, she’s like, ‘You can do better.’ I sit back and look at that tight circle, which includes my brother, my extended family and everybody that supports me.”

“My church family as well at First A.M.E. of Manassas. When I got to ESPN the first time, my church family wrote a letter to the company pretty much saying, ‘We just want to let you know that we believe in Cornell. Thank you for the opportunities he’s getting.’ That was literally the whole letter and 400 people signed it. To have that kind of support behind me in anything that I do is amazing. When I moved down here to the Hornets, my church family knew what I was doing, that I had a plan for what I was going to do and supported me no matter what. I do consider them all role models because they instill in me what to do on a daily basis. To have that background is amazing. Not everybody has that role model, especially in the African-American community. I just want to be that for as many people as I can in a personal sense.”